Fin-tastic Finds is a series on the hidden gems of the Cannery introduced by Heritage Interpreter Lina. See if you can spot them the next time you visit the Gulf of Georgia Cannery National Historic Site!

On the fish wall in the Cannery, you can find many species of commercially caught fish from Canada’s west coast, but have you met Georgia the Sturgeon? Look up and you will find her hanging from the ceiling!

Sturgeons are large freshwater fish which stay close to the coasts of the Northern Hemisphere. In B.C., you can expect to see white and green sturgeons on the west coast. They have a long snout, with 4 white whisker-like barbels underneath, which brush against surfaces in search for food, and they have a toothless mouth. These large fish are also an ancient species, as fossils date back to 98.9-65 million years ago.

The largest white sturgeon recorded was 629kg, caught in the Fraser River in 1897.

In fact, in the Cannery, there is a news article photo of a 3.4-metre long and 360kg sturgeon, caught in the Fraser River on Wednesday, August 2, 2006. It took the two fishermen, Cyril Paquin and Tim Swain, 90 minutes to fish it out of the water! 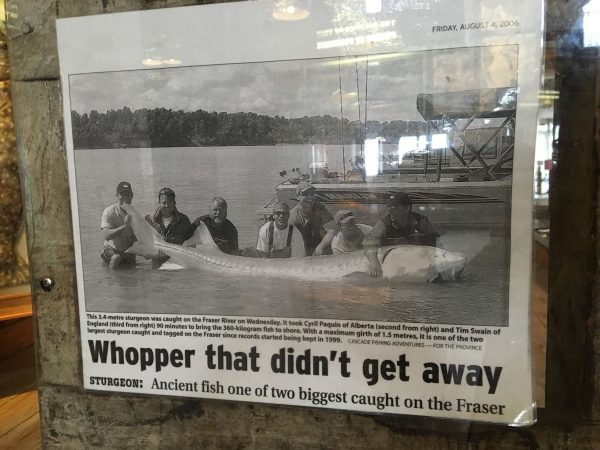 Sturgeons spawn only after they are ten years old and have been overfished over the years mainly for their caviar, classifying them as vulnerable. Therefore, since 1993, wild sturgeon can only be fished as ‘catch and release’.