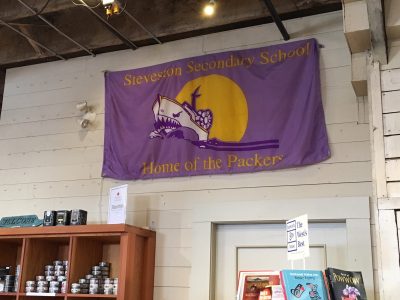 For those who lived in Steveston during the post-war Baby Boom, Steveston High School is a source of nostalgia, a centerpiece of the community, and the other half of a long-standing basketball rivalry with neighbouring Richmond Secondary.

At its peak, Steveston High had an enrolment of 1,750. The school, now amalgamated with London High School into the Steveston-London Secondary School, has a website proudly trumpeting its predecessor’s academic and artistic achievements. To top this off, Steveston High was a formidable competitor in the world of high school basketball.

From 1961 to 1964, the Steveston Packers won four consecutive times among Richmond’s high schools in the Island Championships, competing against their arch-rival, Richmond High’s Colts.

In 1984, the city of Richmond was declared the “centre” of high school basketball in the now Metro Vancouver region, with the 1983-1984 basketball season’s final game between the Packers and Colts amassing an audience of 6,282 – said to be 2,000 over capacity.

Today, while the Steveston-London Sharks compete on behalf of its fabled predecessors, you can buy a piece of the school spirit and excitement with our Steveston Packers’ T-shirts, found in the Cannery Store! Interesting fun fact: the cigar you see on the T-shirt (nestled inside the shark’s mouth), was eventually taken out, as you can see in the banner above.