The “Collections Catch of the Week” blogs showcase artifacts from our collection that are not normally seen in our displays. This season’s blogs are submitted by our 2019 summer Collections Assistant Enid. Be sure to check back weekly to see what exciting finds she has chosen from the collections!

This week’s collections catch is salmon longline gear, generously donated by the Seter family. George Seter was a longtime fisherman involved in fishing research, including one project on salmon distribution in the Eastern North Pacific Ocean from 1961 to 1967. During this project, longline gear was used as the primary method of catching salmon. The gear was bought from Japanese commercial suppliers and consisted primarily of a flat circular basket (the skate) made of interwoven bamboo strips, a mainline with 49 hooks attached, as well as 10 small wooden floats, painted yellow for extra visibility.

A standard set of longline gear was 30 skates, which were set up in the water like the diagram below (Fig. 2 Longline layout). It took five men to set up the longline, and after the fish were caught, the line was hauled in by hand and recoiled systematically in stages to ensure that the hooks for each gear did not snag and would uncoil smoothly for later settings. For more information about the artifact, click here are some pages from the Manuscript Report Series of the study George Seter was involved in. 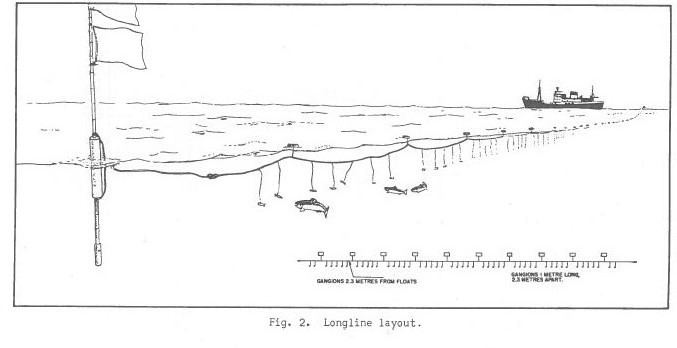