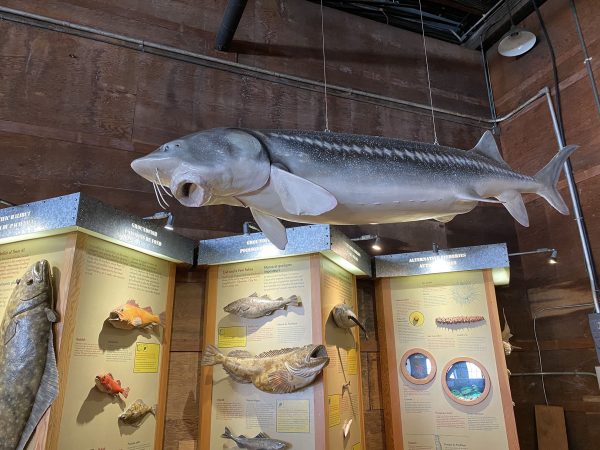 Georgia is the name affectionately given to the biggest fish model on the Cannery’s Fish Wall. Representing the white sturgeon, a prehistoric species that can still be found in the Fraser River, Georgia is on display at the Cannery for most of the year, on loan from the Fraser River Sturgeon Conservation Society.

These freshwater-dwelling “dinosaurs” can measure up to six metres long and can weigh up to 800kg. That is the approximate height and weight of a giraffe! Unlike other fish, sturgeon don’t have scales, but rather large bony plates (called scutes) that feel like a rough skin. They rely heavily on their sense of touch and taste to find their favourite foods, which are usually other fish. You can recognize a white sturgeon by its whiskers (called barbels, that help it feel for food) and vacuum-like mouth that contains no teeth. Of course, that would be if you didn’t already recognize the sturgeon from its massive size! White sturgeon can also live to be over 100 years old. While their long lifespan is impressive, it can also be a problem. When an animal lives longer that means it does not reproduce quickly. For white sturgeon, this means that if they are caught before they are 30 years old, there is a chance they won’t leave any baby sturgeon behind. Since the late 1800s, there has been a lot of fishing on the Fraser River which has caused these local white sturgeon to be at risk. Their population is now so low that they are a protected species that could face extinction.

Even though they are large, it can be hard to spot white sturgeon in the wild. So on your next visit to the Cannery, don’t forget to look up when you get to the Fish Wall, so you can get a glimpse of this prehistoric giraffe-sized fish.